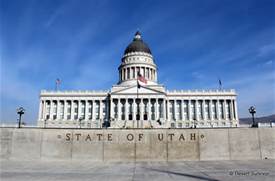 The following comes from an Opinion Article in the Salt Lake Tribune newspaper on Feb 13, 2016. Link to original article is here.

In the past nine years, advances in technology have made our everyday lives safer, healthier and more efficient. Just think: iPhones, car backup cameras and digital TV transmission are just some of the innovations introduced during that time.

So it’s hard to believe that in the past nine years, Utah’s building codes have not been significantly updated to make our homes safer, healthier or more energy-efficient.

But now, Utah lawmakers have an important opportunity to bring our homes up to date. Several bills, including House Bill 121 from Rep. Becky Edwards, R-North Salt Lake, propose to bring our building codes up to 2015 standards. It contains measures to significantly reduce air pollution and even save homeowners money — the ultimate win-win situation.

But what do building codes have to do with air pollution? More than most people realize. Homes and buildings are now responsible for nearly 40 percent of Utah’s air pollution, according to the Division of Air Quality. When building codes are up-to-date, homes are more energy efficient; they use less gas and electricity and release fewer harmful emissions. This is why Gov. Gary Herbert’s bipartisan Clean Air Action Team recommended improving the energy efficiency of both new and existing homes. With increased insulation, more efficient doors and windows, reduced duct leakage and high-efficiency lighting, to name just a few improvements, less energy will be wasted.

Less money will be wasted, too. Adopting the full 2015 International Energy Conservation Code (IECC) translates to major cost savings to homeowners. Lower energy bills of around $250 per year mean the upfront cost of improvements pay for themselves in just over seven years.

Utah’s Uniform Building Code Commission, an appointed panel of construction professionals, carefully studied the full code proposals over a seven-month period. They ended up watering down the international code recommendations slightly, but even those lowered energy standards are a vast improvement from our current buildings codes.

That unfortunately is not true of a bill moving forward from Rep. Brad Wilson, R-Kaysville. House Bill 316 (Building Code Review and Adoption Amendments) further waters down the proposed code updates. In addition, it would delay how often we would next update our building codes — from the current three-year cycle to every nine years. It also forbids state air quality officials from ever instituting safeguards that affect buildings, an unnecessary obstacle that could prevent progress for years to come.

Wilson has claimed that Utah can’t adopt stricter codes because it would make our homes unaffordable. However, we believe that even our low- and moderate- income homeowners are more than willing to pay slightly more for a home upfront, knowing these investments will soon pay off.

And these upgrades will also pay dividends in cleaner air for all us. Improving the efficiency of new homes is particularly important, of course, since Utah’s population is growing at a rate that’s twice the national average. That means a lot more homes and businesses, more hot water heaters and furnaces, and more emissions that build up during our winter inversions. In fact, buildings are on track to become the dominant source of smog-causing emissions, overtaking both vehicles and industrial sources.

Utah residents identify air quality as one of the top three most important issues facing the state. They also cite air quality as the issue that the state has been least effective in addressing. Updated building codes — not a watered down facsimile — represent a significant and commonsense step that legislature can take to not only save homeowners money, but also to ensure our families have clean air to breathe for generations to come.